This year’s Lamrim guided meditation retreat, held from September 25 until October 6, was led by the experienced teacher Ven. Tony Beaumont. Everyone appreciated Ven.Tony’s wisdom and compassionate guidance during the retreat sessions. The Group Retreat Facility accommodation was perfect for the attendees and everyone raved about the food and the kindness of Pavel and Jana. De-Tong Ling is so fortunate to have such wonderful people on site! 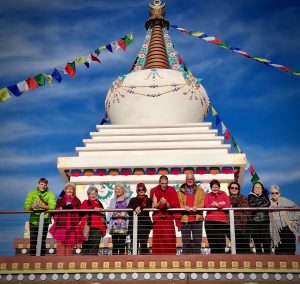 The retreat was enjoyed by 11 people, with students from South Australia and Western Australia able to take advantage of the relative freedom of movement across SA-WA border to make it to Kangaroo Island.

However, it was touch and go for a while. Organising the retreat was difficult and there were periods where it seemed that it would need to be cancelled. As it was, the original volunteer cook was unfortunately unable to travel from Tasmania, as well as seven people who had registered and already paid a deposit.

It was even touch and go whether Ven. Tony could make it from Queensland! Through much perseverance, eventually the retreat went ahead and it was a great success. The retreat was co-ordinated by Gen. Thubten Dondrub, assisted by Pavel Janko, Centre manager.

We thank all of the participants for their time and great energy and hope to see many more successful retreats in future!